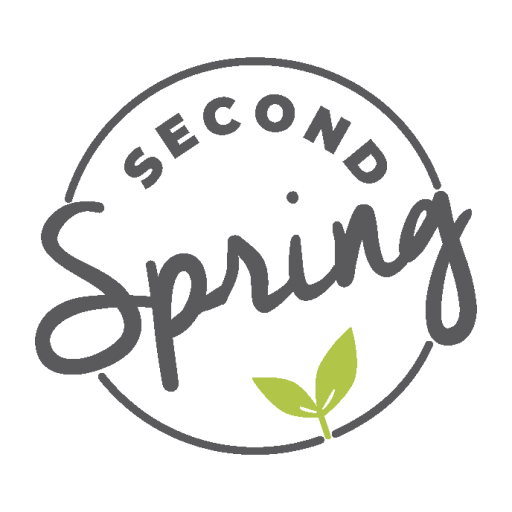 5 Tips for Baking with Sprouted Flour

Sprouted flour is made from grains that are soaked and sprouted, meaning the seed is at the earliest stages of growing into a plant. Then, the whole sprouted grain is dried and milled into a fine flour, with nothing added or removed. This process enhances digestibility, bioavailability, taste and texture, and extends its shelf life.

Baking with sprouted flour is no different than any other baking. It doesn’t require any fancy techniques, extra ingredients, or special tools. If you remember a few simple tricks and know what to expect, you can convert your favourite recipes to sprouted flour in no time!

How is sprouted flour different?

Sprouted flour is whole grain, meaning no part of the grain is removed during the milling process. Sprouting reduces bitterness and brings out sweet, rich flavours. Sprouted flours are also lighter and softer than non-sprouted whole grain flour.

Sprouted flour works in all the same kinds of recipes as white/all-purpose flour (cookies, muffins, breads, cakes, pasta, pie crust etc.) but it shouldn’t be directly compared to or replace it cup-for-cup. White flour has the bran and germ removed, and then it may be bleached and fortified to add back some of the nutrition that was lost.

Sprouted flour is more comparable to using whole grain or whole wheat flour, but sprouted flour is actually more user-friendly. It has higher rise/loaf volume, produces a fluffier, less-dense texture, and requires less time. In our experience, sprouting also improves extensibility (stretchiness). This makes it easier to work with in breads and pasta, and when rolling perfectly thin crackers and flatbreads. 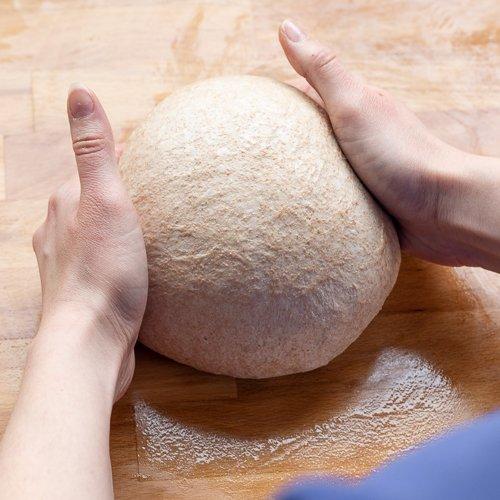 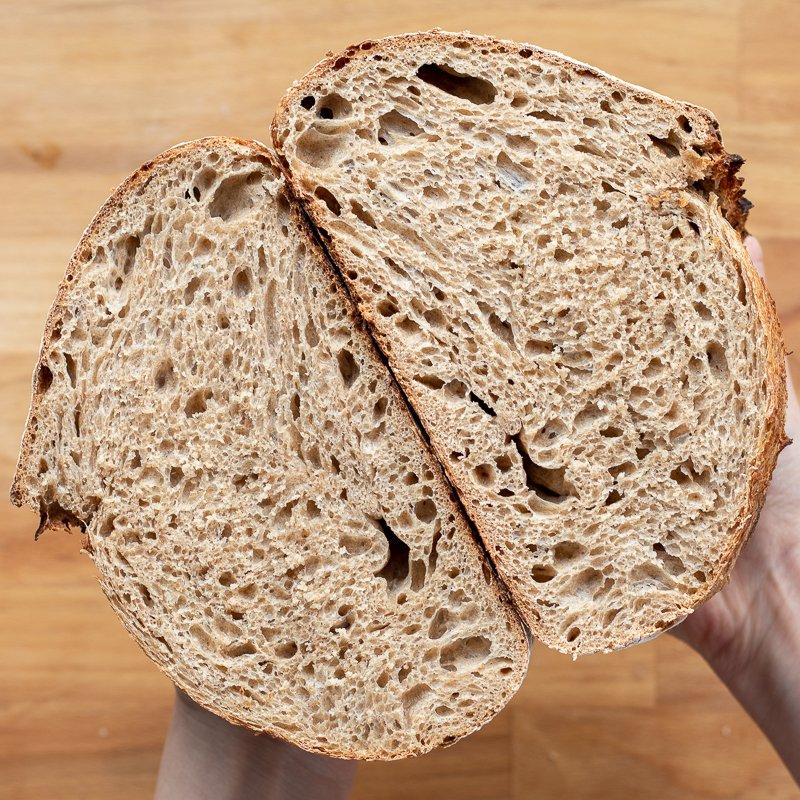 Sprouted flour tends to be thirsty, your batter or dough should be slightly stickier than you’re used to. If you’re using a recipe developed for whole grain or whole wheat flour, it will likely need a few extra tablespoons of liquid (water, milk etc.). We recommend adding the extra liquid slowly, you don’t want flour soup either!

If your baked good turns out a little too dense, you might be tempted to add more baking soda or yeast so it will rise higher. Instead, try adjusting the liquid or fat for more lift and a softer, lighter texture.

Sprouted oat, sprouted buckwheat and sprouted chickpea flour are especially good at soaking up liquid. Your batter should be a quite soft when you first mix it, but will firm up quickly.

Sprouted flours are whole grain, meaning it still has 100% of the bran and germ. Because of this, sprouted flour is a bit slower to absorb moisture. Resting batter or dough just 5 – 10 minutes before baking helps sprouted flour absorb moisture and improves the texture of the baked good. If you have extra time, we find up to an hour rest beneficial for cookie dough. A quick rest is also helpful while mixing bread dough. It can cut down kneading time and help you to determine if the dough has adequate hydration. Sprouted dough may seem too sticky at first, but instead of immediately adding more flour, take a quick pause – you’ll likely find after 10 minutes that the dough is much more manageable.

Experts usually recommend gentle mixing and shaping techniques for whole grain breads, so it’s no surprise that the same goes for sprouted breads. The bran pieces can cut through gluten strands, making whole grain flour more delicate to work with than white flour.

To account for this, we recommend gentler methods for developing gluten. We prefer the stretch and fold technique or using your mixer on a low speed for a longer time, rather than quick and vigorous kneading.

Open and airy crumb structures can be challenging with whole grain doughs, but we find it very possible with sprouted flour by using high hydration and handling the dough gently.

Whole grain flour is naturally darker in colour because of the bran, but sprouting also converts starches to sugars. More sugar results in sprouted baked goods browning faster and darker in the oven. This has the additional benefit of needing less added sugar in recipes (depending on your taste preferences, we suggest you start by reducing about ¼ cup).

Things like cookies, muffins and pancakes will be a lovely golden brown, not pale brown like with all-purpose flour. Sprouted breads often have a deep brown crust that imparts a ton of crunch and flavour. With sprouted breads, don’t be afraid to bake a little darker!

If your sprouted baked goods are browning too fast, you can make a tent with tinfoil to slow it down.

5. Watch out for over fermentation

Sprouted flours have lots of enzymatic activity, so you may notice that sprouted bread proofs (rises) a bit faster. Pay attention to the signs of good fermentation (rise, bubbles etc.) rather than relying on a timer.

Over proofed breads can collapse or be dense and flat. If you’re unsure, it is better to be slightly under proofed than over proofed.

Lengthy fermentation, autolyse and preferments are common for whole grain flours, but these are not necessary with sprouted flour. The only preferment you need is sourdough starter to leaven sourdough breads. The goal of these is to develop flavour, improve texture and activate enzymes, all of which was already done during the sprouting process.

While you don’t need a proper autolyse, resting your bread dough for about 10 minutes helps reduce mixing time and makes the dough easier to handle.

This may seem obvious, but if you’re new to sprouted flour we recommend starting with a recipe formulated for sprouted flour. A sprouted recipe will have these tips built in, so you can get a good feel for the differences. To incorporate sprouted flour into your regular recipes, you can replace up to 50% white flour without changing the recipe. After 50% you should be prepared to do a little experimenting. Sprouted wheat or spelt can directly replace whole grain or whole wheat flour if you keep these tips in mind. Sprouted gluten-free flours can directly replace their non-sprouted counterpart. That is, sprouted oat flour for oat flour, sprouted buckwheat for buckwheat flour etc. These flours cannot directly replace other grains (ie. sprouted oat flour cannot be swapped 1:1 for all-purpose flour). Sprouted flour cannot directly replace gluten-free flour blends because blends often include additional ingredients like starches and xanthan gum. In this case, you would need to create your own blend. It’s worth noting that not all sprouted flour is the same ­– like any flour, there is variation between brands. The grain variety, where it’s grown, how long it sprouted and how it is milled will influence how the flour performs. If you sprout and mill your own flour at home, it will also act differently. If you’re using a recipe made with a different brand of sprouted flour, we recommend holding back about ½ cup of liquid and adding it slowly while mixing, if needed. Pay attention to any descriptions or pictures to determine what texture your batter/dough should be.

© Second Spring 2019, All Rights Reserved
Would you like 10% OFF your first order?
Sign up and we’ll send you a code!