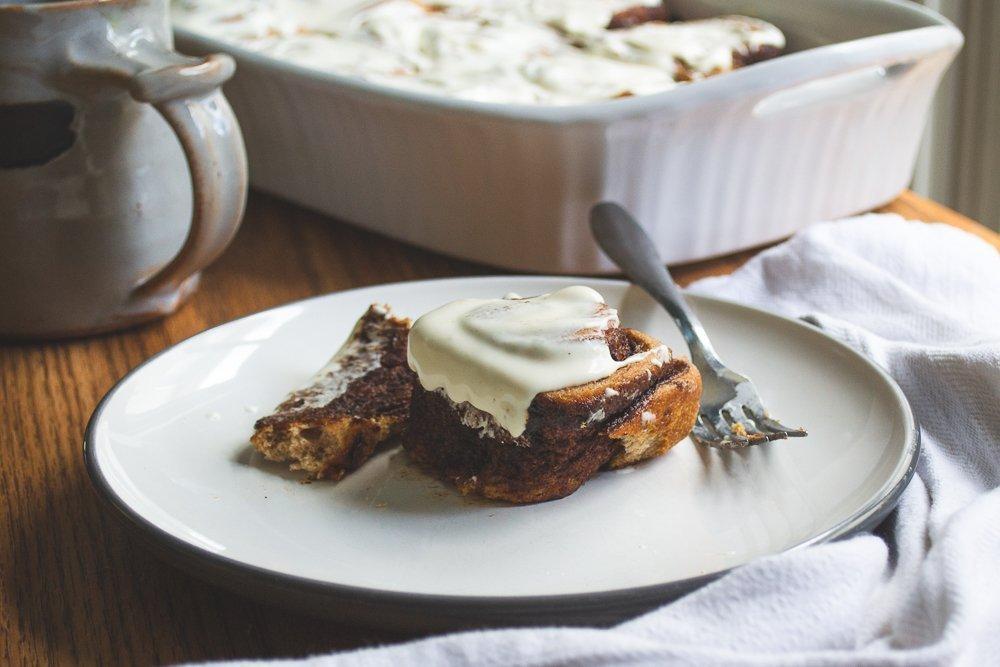 What could be better than a warm, fresh, gooey cinnamon roll on a lazy weekend morning? This recipe is made with 100% sprouted whole grain wheat flour and no refined sugar. Whole grains may not be what you’re used to using for soft and fluffy cinnamon rolls, but let me assure you the texture won’t disappoint! Sprouting wheat also aids in digestibility and makes grains taste lighter and sweeter, meaning less sugar is needed in the recipe. These are loaded with warm cinnamon and coconut sugar filling, and the simple maple cream cheese icing throws it right over the top. Sprouted wheat cinnamon rolls are just as decadent as you would expect, move aside Cinnabon!

This recipe is a bit more involved, so we recommend reading the instructions and tips thoroughly before you begin. It will also require a little patience. There will be lots of delicious smells filling your home and making you want a cinnamon roll right now, but cutting corners will definitely affect the outcome with this one. Mix in a little extra love and these sprouted cinnamon rolls will be your new brunch favourite. Happy baking! 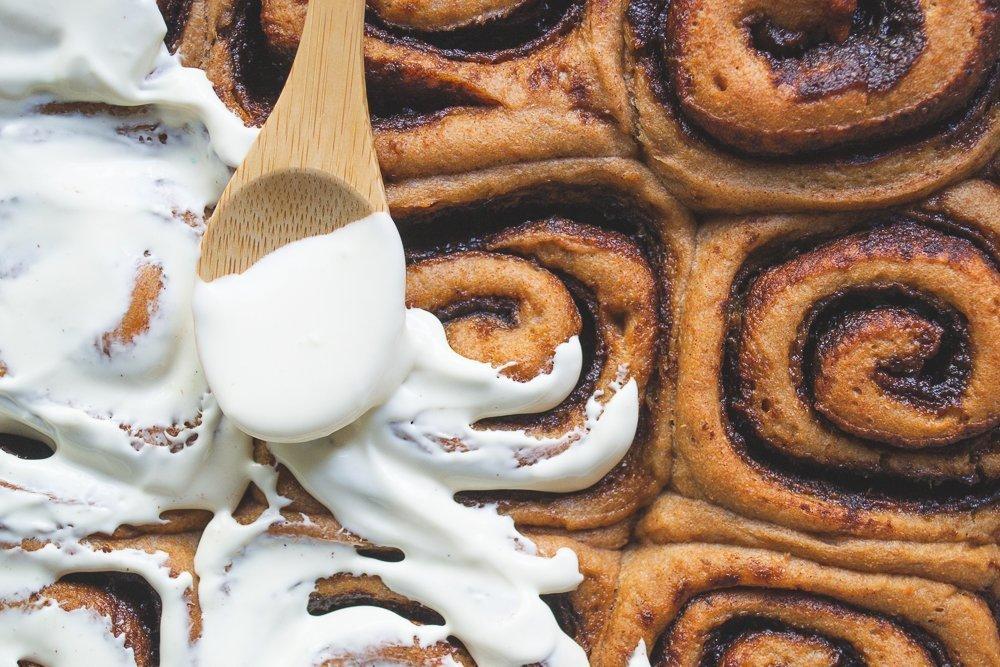 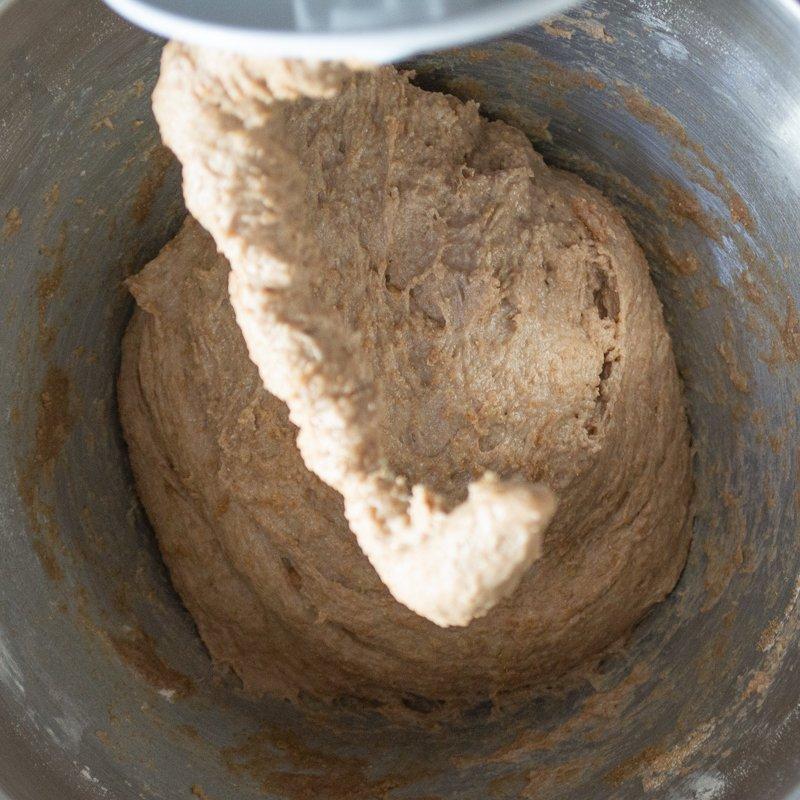 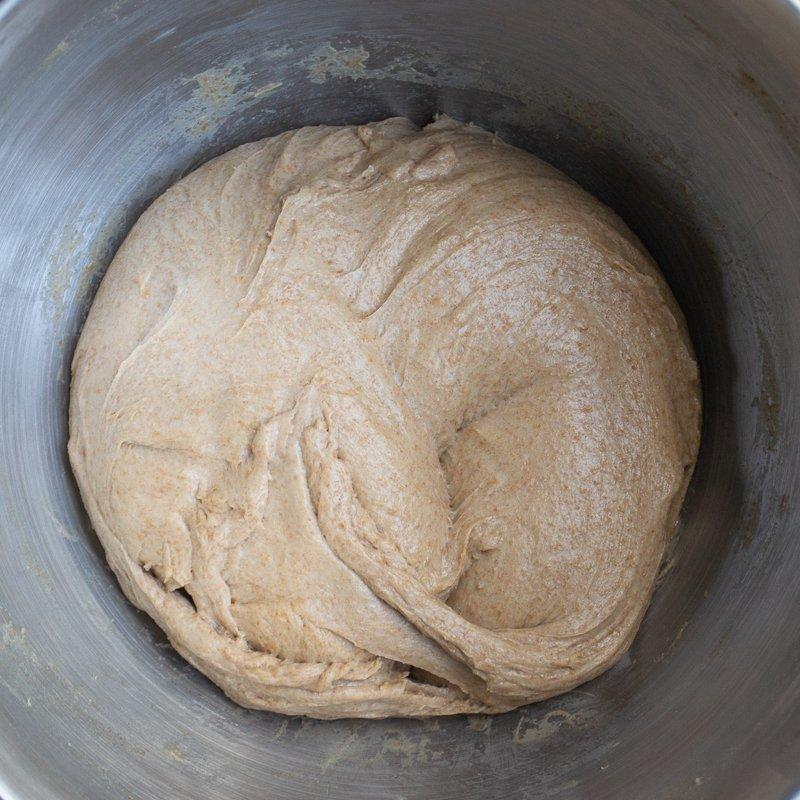 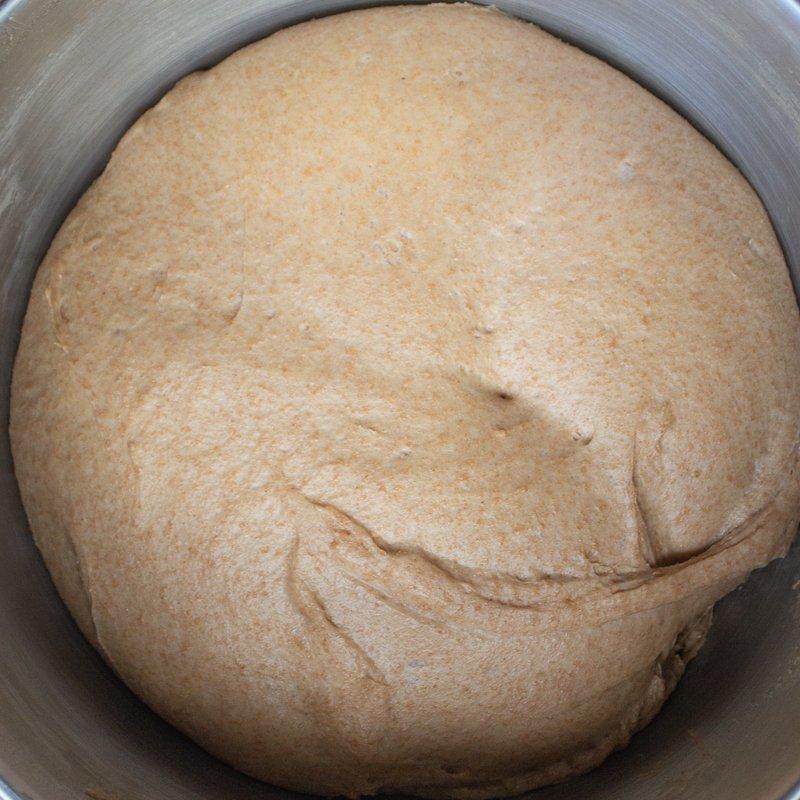 5.  If the top of the dough starts to look or feel dry at any time during rising, simply dampen the tea towel slightly then         cover the dough with it again.
6. Roll the dough into as tight of a log as you can! Use your thumbs to gently smooth and tighten the dough as you roll,      creating surface tension. Once the rolls are cut, you can gently tighten individual rolls if necessary.
7. If you would like your cinnamon rolls browned all the way around rather than pull apart rolls, you can bake them
on a parchment lined baking sheet. Once cut, place them on the baking sheet (or sheets) about 2 inches apart.
Decrease the baking time to about 25 minutes, until golden (if using 2 trays, swap racks halfway through baking).
8. If you’re having trouble getting your icing smooth, the cream cheese was probably too cold. Heat the icing in the              microwave for about 20 seconds and continue to beat. 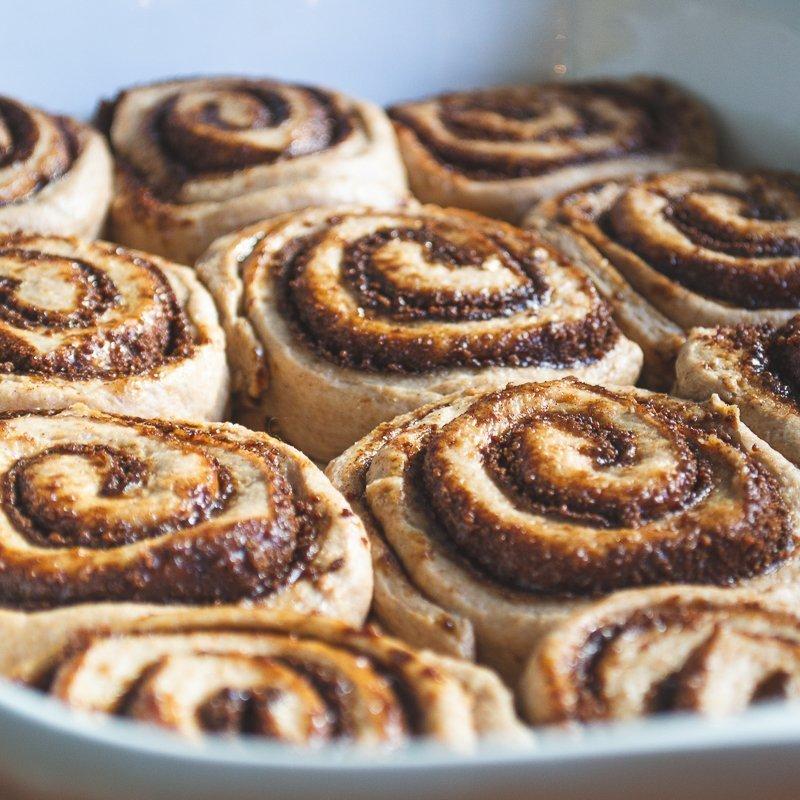 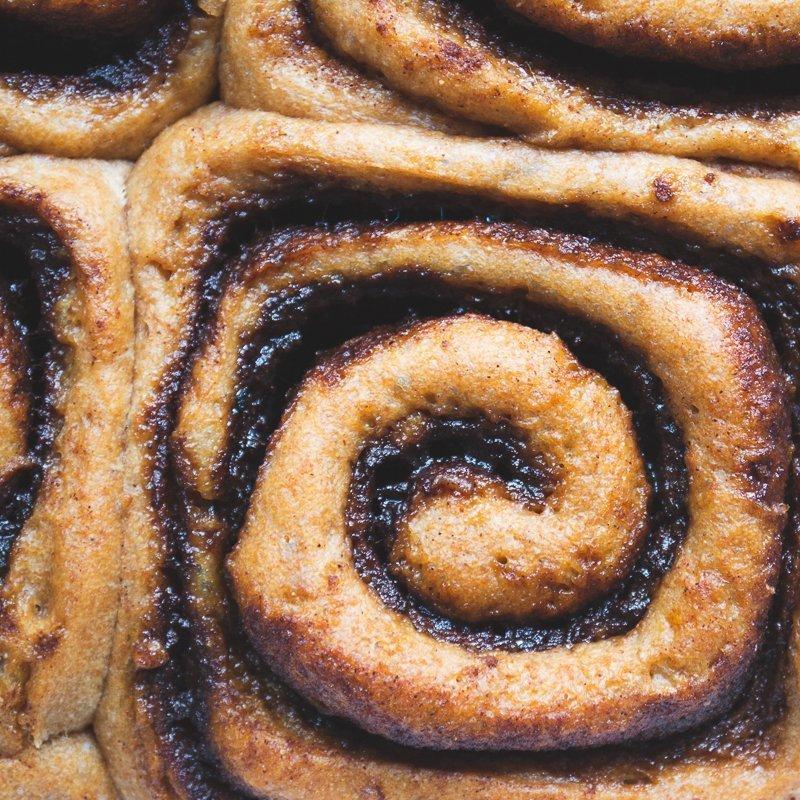 Baked on a baking sheet 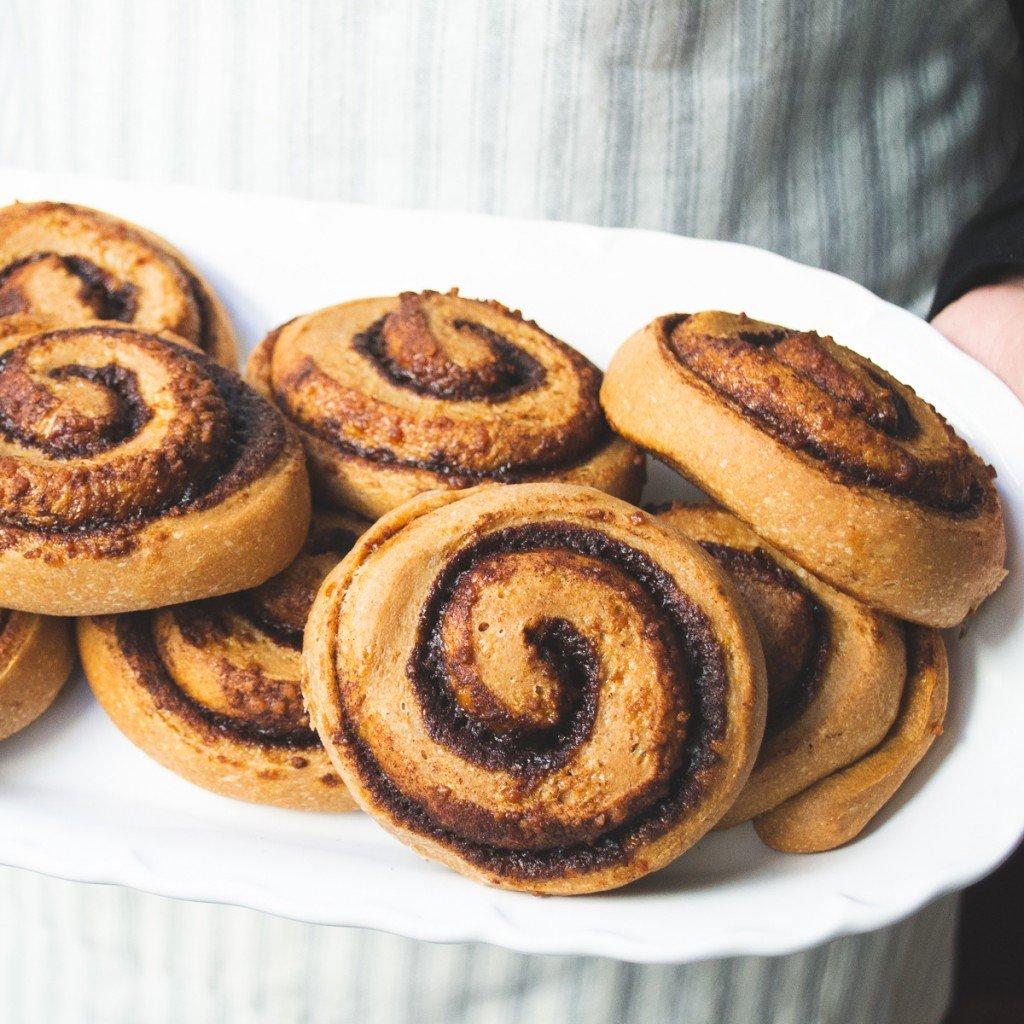 how To Properly measure flour

A kitchen scale is recommended because it is the most accurate way to measure flour. However, if you are using cup measures the best method is to fluff up the flour with a spoon then spoon it into a measuring cup (don’t pack it down) until it’s over filled. Sweep the excess flour off the top with a straight edge (such as the handle of the spoon), again not packing down. This should get you pretty close to the gram weight, but pay attention to the textures described in the recipe and adjust in small increments if necessary.

can i make this recipe without a stand mixer?

Definitely, but be prepared for an arm workout! Mix the dough together in a large bowl with a wooden spoon until a sticky dough forms. Allow it to rest for 5 – 10 minutes (to help with stickiness), then knead the dough by hand on a lightly floured counter for about 10-12 minutes, until it is soft and smooth. To knead, fold the dough onto itself and use the heels of your hands to press it together. Move the dough a quarter turn and repeat. If the dough sticks to the counter, scrape it off with a bench scraper or spatula and add small amounts of flour as necessary. Try not to add too much as it can make the dough dry. If you’re brand new to kneading, there are lots of great YouTube tutorials. Some electric hand mixers also come with dough hooks, which can be used the same as a stand mixer but it may require more kneading time. 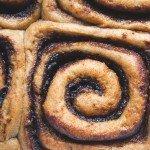 How To Make It:

Once completely cool, store cinnamon rolls covered in the fridge.  We think these are best enjoyed warm! If reheating, place cinnamon roll in the microwave for 20-30 seconds.

Have you made this recipe? Tag @secondspringfoods on Instagram! 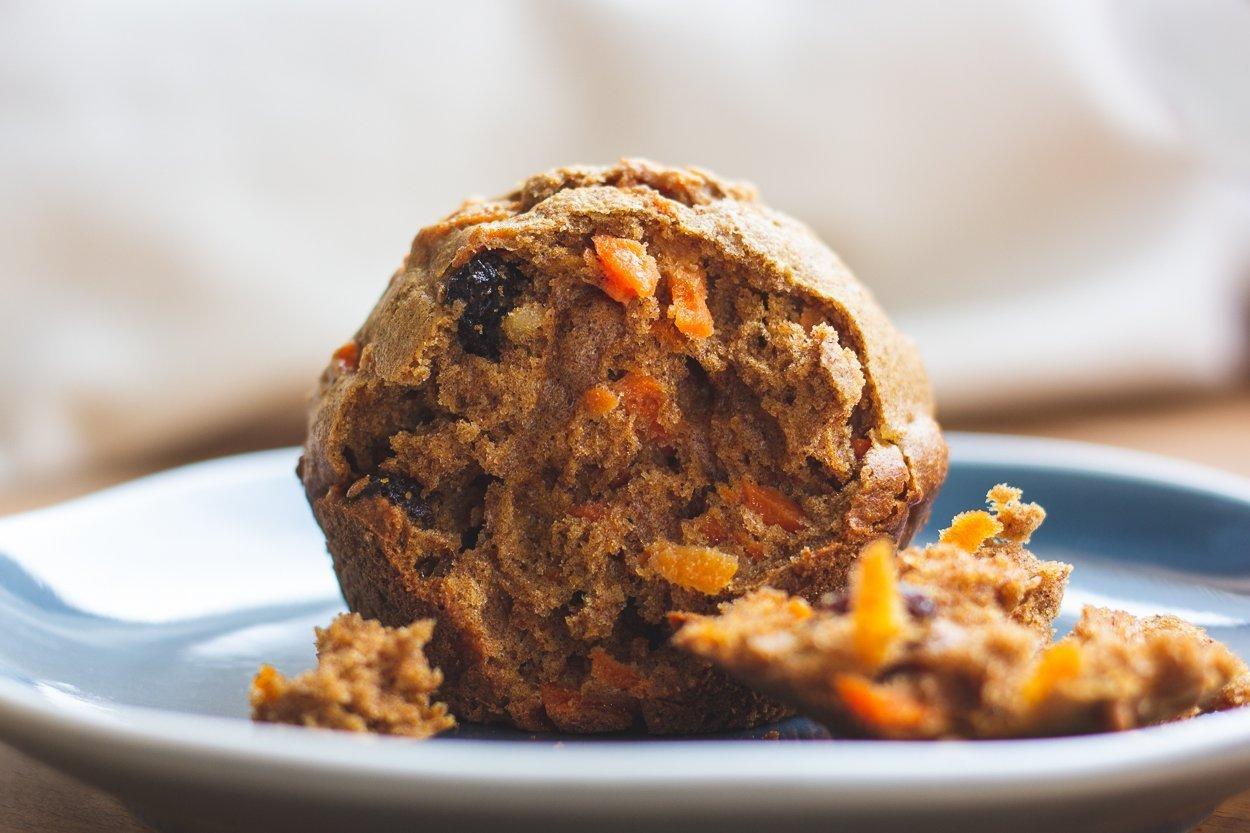 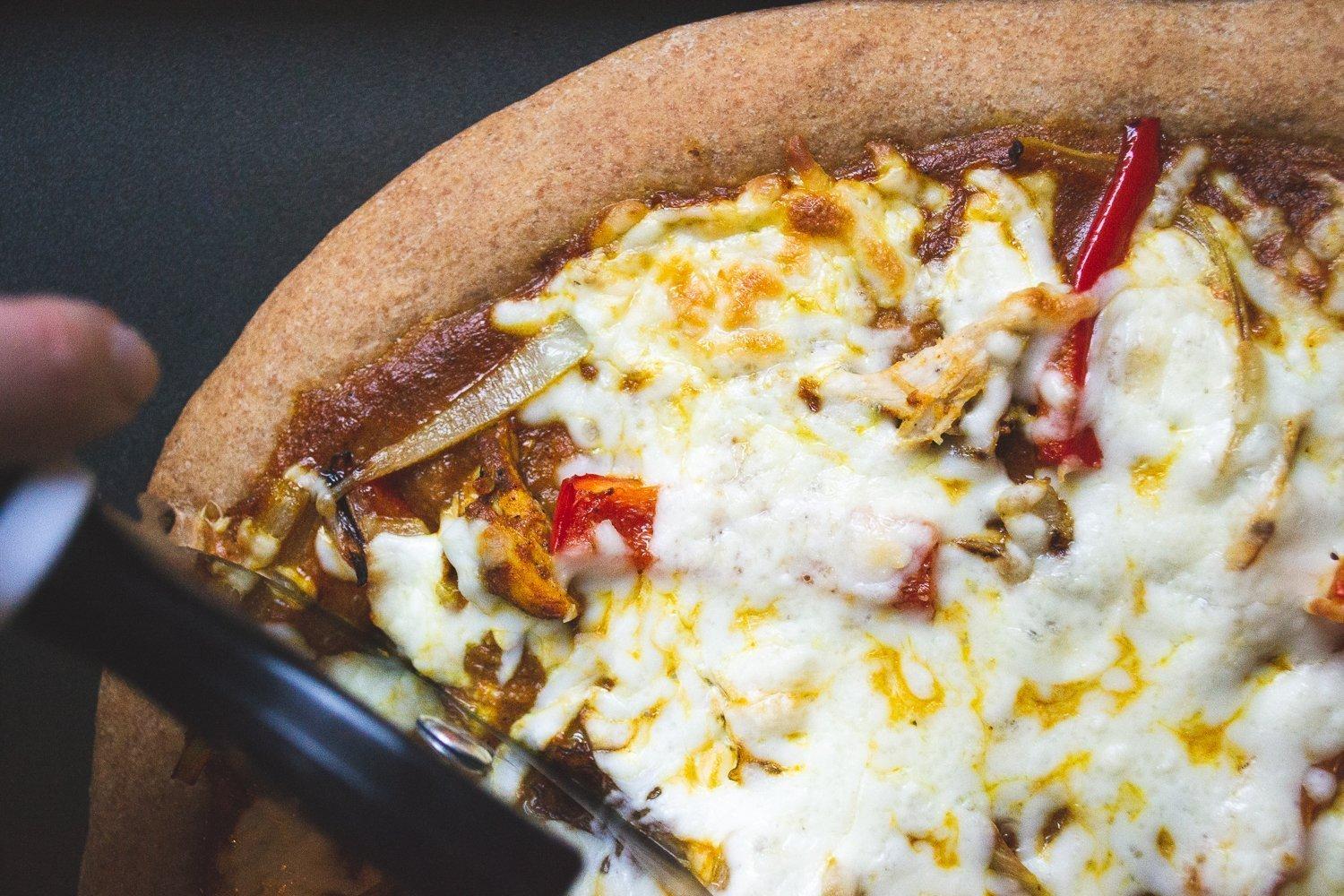 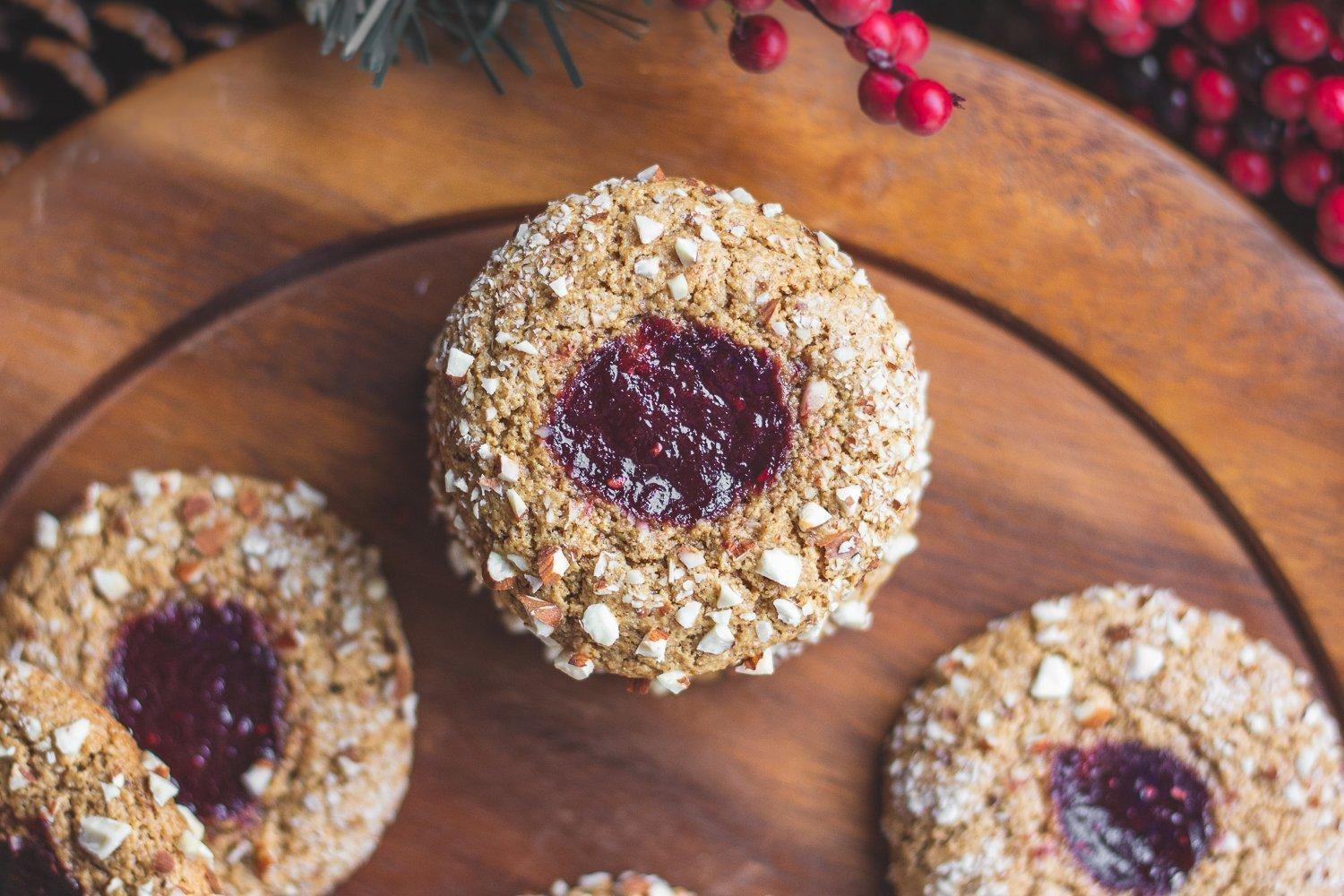 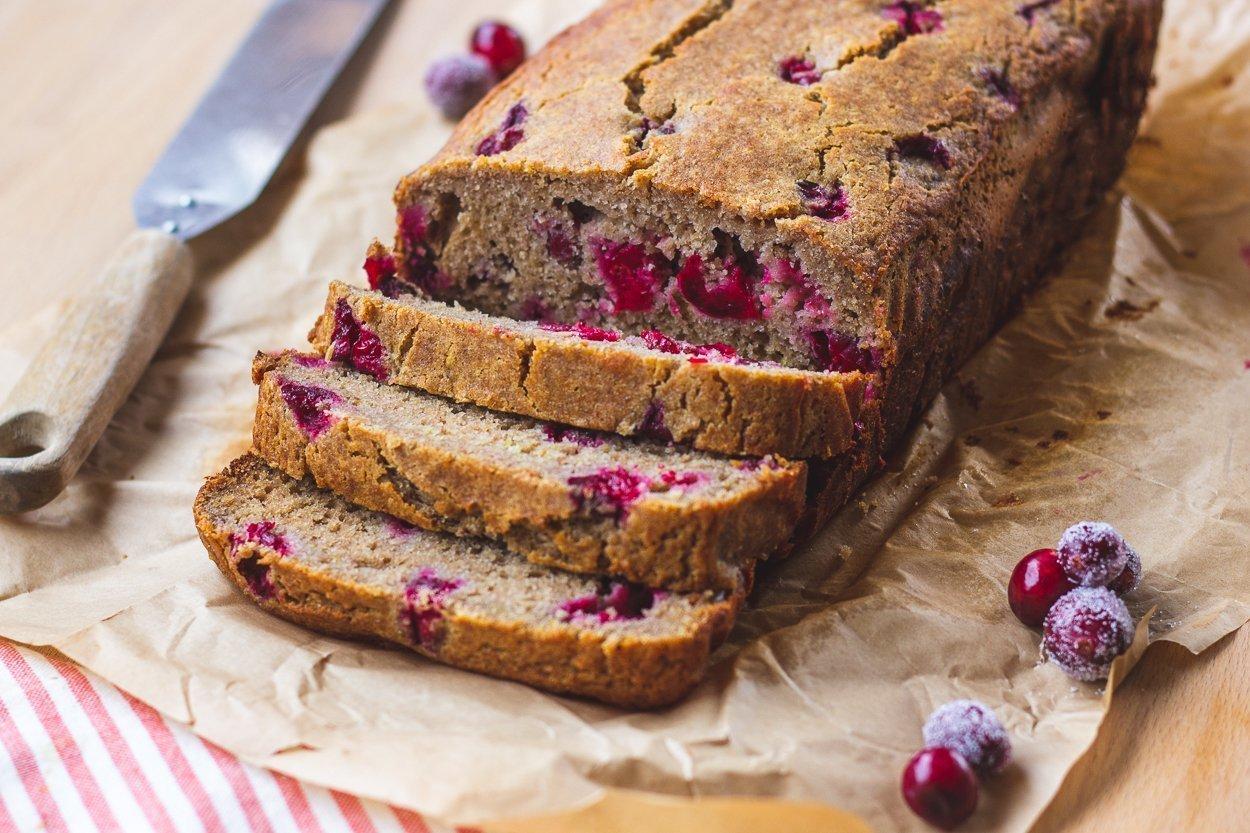 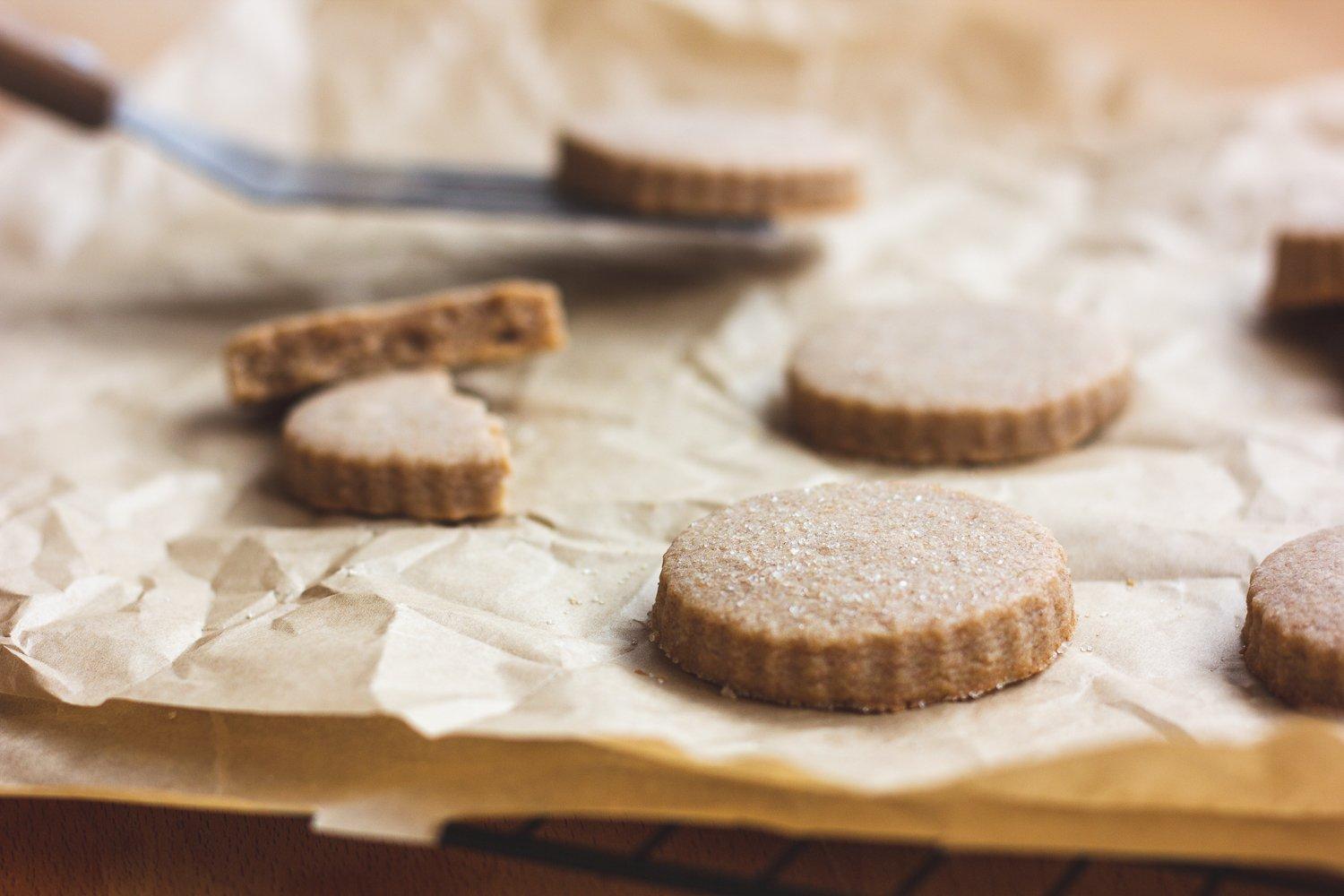 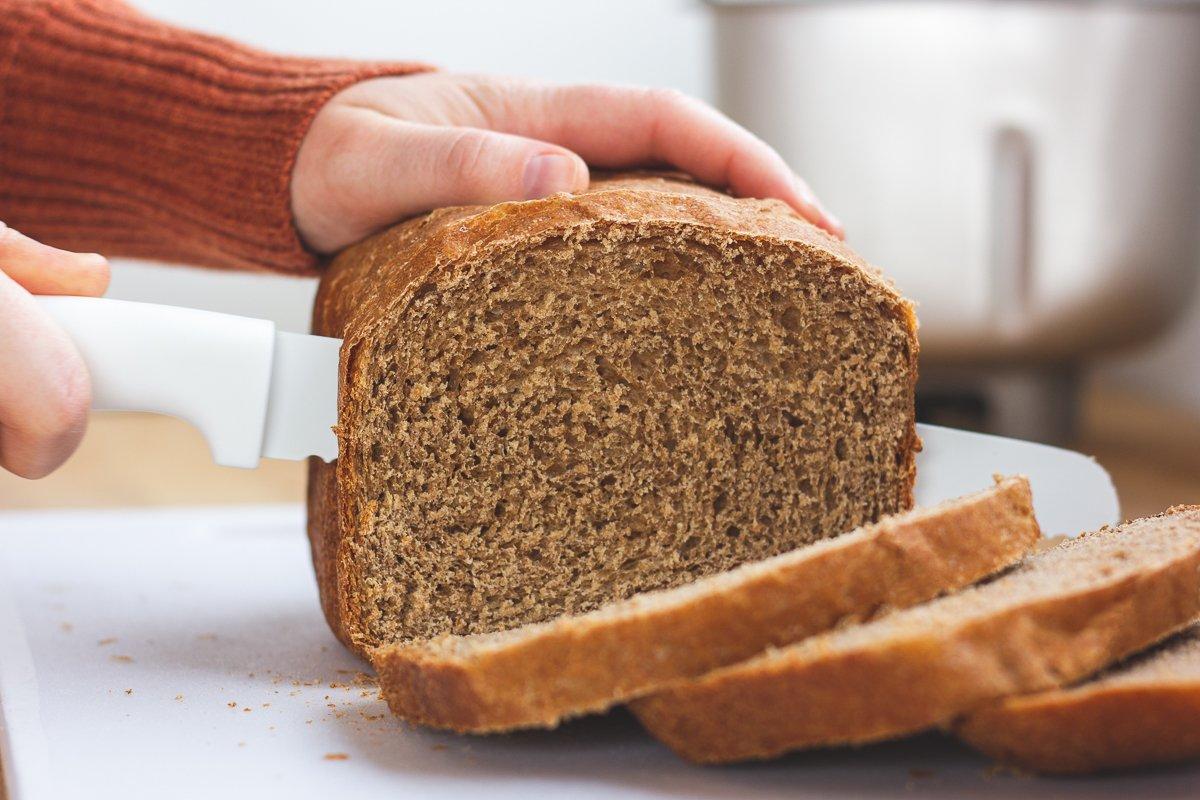